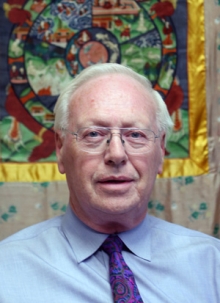 Dr. James Daniel (“Dan”) White, Jr., associate professor and founding member in UNC Charlotte’s Religious Studies Department, died on June 12, 2018 after a brief illness. He was 72 years old and had planned to retire from teaching at the end of the 2017–18 academic year.

Dan was at UNCC for 47 years, always seeing his primary role as that of a teacher. Yet he was also a respected scholar, the author of journal articles and book chapters on a wide range of topics in Indian history and religion. He served on several occasions as a consultant to major corporations and the United States government.

In the classroom, Dan introduced thousands of students to India’s religion, history, architecture, and literature. He delighted in teaching occasional Sanskrit tutorials as an “overload” of his already full teaching schedule, and he took pleasure in nurturing talented scholars, whether enrolling them in his department’s M.A. program or sending them to other schools’ Ph.D. programs. UNCC colleague Jeff Meyer praised Dan's tireless devotion to students who showed interest in India. “Once he had a student who wanted to do independent study on the Bhagavad Gita but had a full-time job. Dan drove fifteen miles once a week to meet with him during the student's lunch hour, then made it back for his afternoon class.”

Born on June 21, 1945, in Franklin County, North Carolina, young Dan White was very close to his grandparents and often accompanied his grandfather on his route as a rural mail carrier. His grandfather introduced him to people of all walks of life and taught him to respect every individual. When Dan turned six, his grandfather gave him a subscription to National Geographic magazine, which he read avidly—often in the company of his birddog, Pat—and which sparked a lifelong interest in India. During his years as a summer pastor in eastern North Carolina in the late 1960s, Dan often encountered racial bias, which he vigorously opposed, mindful of his grandfather’s words and example, though his willingness to speak out earned him occasional physical threats from the Ku Klux Klan. Later in life, Dan strongly supported efforts to secure rights and dignity for members of the LGBT+ community. One of his final scholarly projects was an ethnographic study, supported by a grant from the Carpenter Foundation, exploring the ways in which gay Hindu men in today’s India have harmonized their religious and sexual identities.

A graduate of Campbell College in Buies Creek, North Carolina, Dan’s exceptional academic record won him acceptance to graduate programs at Harvard, Yale, Princeton, Columbia, and the University of Chicago. He chose the University of Pennsylvania, where he learned Sanskrit while studying the religion, literature, and architecture of Hindu India, completing his coursework in 1971. That same year, he joined the fledgling Religious Studies department at UNC Charlotte as its third founding member. Later, when the department began offering an M.A. degree, Dan would often reflect on the ways in which his graduate work—culminating in his dissertation, “Secularization and Kṛṣṇa Bhakti Among Urban Indians,”—shaped his approach to directing M.A. students, always pressing them to do the work that most engaged their interests and to do it at a very high standard.

During vacation breaks, Dan often led students and life-long learners on very popular excursions to India, sponsored by such institutions as the National Geographic Society, the American Museum of Natural History, and the Smithsonian Institute. Catherine Mowry, who participated in one of those trips, described Dan as a “great tour leader. He made you see the lotus bloom every day. He dazzled us with the Taj Mahal, the Red Fort, and the wonders of Ajanta, Ellora and other sites, yet took us into lesser known places of great simplicity and beauty. He helped us see the beauty of India in its culture and in the lives of ordinary Indians in big cities and in country villages.”

Dan’s recreational time often involved study, consuming mystery novels, visiting the Smoky Mountains, and performing acts of kindness for others. He became an accomplished cook, and his lovely thank you notes brought a warm feeling to those lucky enough to receive them. Though Dan often jovially described himself as a cantankerous curmudgeon, he was well-known for his kindness, generosity, and thoughtfulness.

In memory of this “tiger among men,” the College of Liberal Arts and Sciences and the Religious Studies department have dedicated Macy 110 as the “J. Daniel White Seminar Room.”